There has been much written about positive thinking and the power of thought. But few authors have attempted to explain the process or help readers understand that it is actually themselves who create the outcomes.

In Wright’s early thirties, she became disillusioned with the simple concept that thoughts create reality.  After all, she had visualised and meditated since the age of five, but it hadn’t always worked. She knew that there had to be more to this process. How could we create and achieve what we desire without limitation?

Wright also had a burning desire to understand how a miracle occurred.

Other than medical intervention and prayer, she felt that something had to take place within us, for this to happen.

People are doing the impossible all the time. How often have you heard a heart-warming story of how someone had beaten cancer and cured themselves; or how someone rose above adversity from despair to great heights of personal success?

A change or shift must take place within a person for this to happen. An inner strength must arise for them to achieve this outcome. But how does this happen and where does this come from?

As an eternal questioner, Wright had been asking this question and looking for an answer most of her adult life.

After many years of asking, she did receive her answers. 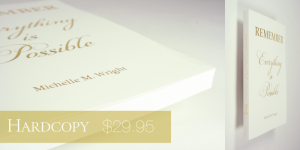 When meditating one evening, Wright began formulating a technique, which she called the ‘Golden Box Meditation’

Wright excitedly embarked upon her personal journey of discovering what this technique could actually do. To her delight, she began manifesting immediately.

As a result of  Wright’s excitement and joy that the technique was working, a large group of people enthusiastically volunteered to trial the Golden Box Meditation. They became ‘Participants’, and together went on an extraordinary journey.

Wright has always believed that we have the ability to achieve the impossible; it is just a matter of understanding how.

Throughout the nine-year writing process, Wright had been challenged in all areas of her life. But the most profound experience happened within a seven month period. During this time, she had a small stroke, which affected her memory and speech. Wright needed to finish her book manuscript and her beautiful mother passed away. Wright was certainly tested, so she had no option but to sink or swim. She chose the latter. This became Wright’s personal testament to the Golden Box Meditation. It enabled her to self-heal from the stroke, finish her manuscript and attain the courage to deal with the passing of her mum.

In summary, Wright wrote the book to help people like herself find answers to their questions. Wright wanted to know how to create, achieve, manifest and self-heal.

“I have been truly tested while on this journey but I can honestly say that I feel very blessed to have found such an amazing tool to help me through the rest of my life.”

“From my experience, I believe that all our answers exist within, we just have to Remember, Everything is truly Possible!”

Have you embarked upon the journey of creating your reality, but found yourself let down because you simply didn’t create or manifest the outcome you so desired?

This book gives you a simple yet powerful tool that will teach you a technique to create and manifest whatever you desire.

You will learn how to negate the doubt cycle, dissolve blockages and most importantly, learn how to make the intangible tangible and the impossible possible!